Writing About Impressionism: Figures to Mention

Impressionism is an art style, based on a direct fixation of impressions, observations, empathy. This trend first appeared in French painting and spread around the world. It had been developing the most actively since the last third of the 19th until 20th century, but also exists nowadays.

"See, feel, express" is the slogan of the Impressionists. What figures can we write about if dealing with this art direction? Vincent Van Gogh's name is probably known to everyone. This artist is famous for his extravagance, incredibly rebellious nature and ambiguity.

However, in life he was just depressed and nowise famed. The latter fame came to him only posthumously: Van Gogh’s paintings beat all records of the cost in modern auction, but he was able to sell only one of his own works by himself. Writing about Van Gogh you may include a short opinion on “why did it happen so”? Was it a bad luck or were his paintings created too early for people to understand their true value?

In his last letter to his brother Theo, Vincent admitted that as he had no children, he considered his paintings to be his offspring. Vincent van Gogh left behind an incredible amount of "posterity": more than 1,700 works. The typical works of Holland period are "Peasant", "Weaver", "The Potato Eaters”.

The color palette is dark and gloomy, but in Paris period, it becomes lighter and brighter, like the paintings "River Seine with boats", "Bouquet of Flowers in a blue vase", "Still life with roses and sunflowers", "The Sea at St. Mary", and so on. The painting "Starry Night" is the most famous of all works by Vah Gogh. Everybody should have heard about it, should not they?

Pablo Picasso is evenly famous for all of us. Picasso is the trailblazer of styles and techniques, inventor of the new forms of painting, and this is actually what made him a significant figure within this art direction. During his lifetime he had created more than 20,000 works. Is not it impressive?

The analysis of works painted by Picasso will be quite a relevant topic for writing essays on this art direction. We should mention the paintings "First Communion" (The painting was created in 1896 for the exhibition of fine arts on the advice of Picasso's father), "Two Sisters", "Woman with a glass of absinthe", "Absinthe drinker".

The World Heritage: the Pictures of Claude Monet

The next significant figure to keep in mind while writing on impressionism is Claude Monet. This is the famous French painter, whose fame came with Camilla Don's portrait, painted in 1866 (Camilla, incidentally, later became the wife of the artist).

The best works of Monet belong to the world heritage: "Women in the Garden", "Woman in Green", and others – "Rocks at Belle-Ile", "Bridge to Argenteuil", - marked with freshness and rich flavor. ''Boulevards of Capuchines in Paris", "Impression. Sunrise", "Poplar", series "Trails" and London's views are Monet's experiments with transmission of subjective, random, fleeting impressions, decomposition of colors.

The Role of Impressionism: What Is It?

We all agree with the fact that every impressionist left a bright, unique mark in the history of the world culture, significantly influencing the sense of beauty. Overall, impressionism is the direction in which everyone can find something special, something unique and beautiful.

Therefore, our task is to save the monument of human soul in that period and bring it to the future generations. In general, the theme of impressionism occupies an important place in the fine arts. If you write essays on this subject, then you can take one of the impressionists to focus your attention on and to explain the idea of impressionism on the particular examples.

The main rebels to go out the frames of classical art were Monet, Renoir, Pissarro, Degas. They refused to stick to the mainstream of that period and intended on showing the real world just like it is, without exaggerations, decorations and pathos. The word “impressionism” first was an insult to an exhibition of such new direction in art, presented in Paris in 1874.

The main goal of their paintings is to leave an unforgettable impact on the person who sees them. That is why, this modern style of art was perceived by the public with applause and awe. Still our contemporary fans of art admit that that period was a boom of new paints, new colors, new perceptions of the paintings all in all.

For example, a famous painting called “A woman ironing” 1869 painted by Edgar Degas would never be accepted in the earlier ages as people from middle classes and working classes were never considered as subjects worth being painted, only in joking comical paintings as rural life with no education. However, with the new era of showing life in art these figures have filled all exhibitions and were sold for quite a lot of money. 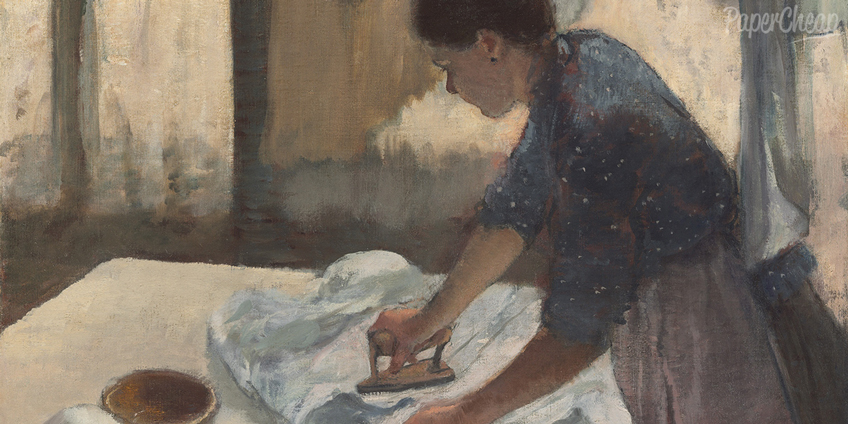 Before it was not that easy. The new artists-impressionists held exhibitions from 1874 through 1886 on their own money. And their paintings were pretty hard to understand by people at first, some of them even called their paintings abominable.

One more special feature of all their works was that they were playing with forms, methods of applying the paint, their paintings looked like sketches what was an absurd at the time of painting’s perfection and finished appearance.

Another merit of every impressionist’s work is an outstanding impression of movements created by the light and color collaboration. The history of art knew no other style of art (yet) that would use the special techniques to capture moving clouds or water waves that precise and alive. Also, a special use of vibrant colors has helped people who look at the painting, observe an amazing blending and transforming of colors as well.

The capturing of light has played a significant role in their art as only impressionists’ paintings have got outdoors sunlight magically flicking and fading depending on the time of the day.

Another influence on the impressionists’ perception of the new art was a new wave from the East. The contrasts and outdoors patterns with asymmetrical arrangements have shown the new artists how the color and paint can use one another in order to create a general complete image. The landscape paintings that are prevailing among impressionists’ famous paintings was also a new brave discovery that longed a good knowledge and ability to capture a daylight and colors of nature and transmit it on a canvas.

The new wave of making art fans literary feel that painting was a great step into even more daring and fascinating art styles that we can observe nowadays, so let us open not only our eyes but also our hearts and see the art around us.