The Most Common Grammar Mistakes That Students Do in College

Posted: 08 February 2019
by Papercheap in Other

English grammar is annoying in two cases. Firstly, if you always get it wrong and it makes you feel awfully awkward. Secondly, if somebody gets it wrong and you realize that a person who mixed up “it’s” and “its” will never get on a medal stand in your mind again. Strange as it sounds, grammar is capable of changing your impression of a person drastically as well as changing your grade. There are two ways out – to read this article or type “write my essay for me” to get professional help.

Of course, you do not have to be a grammar snob and evaluate a person based on grammar mistakes they make. However, we certainly know that correct grammar is absolutely crucial both in everyday and academic life. 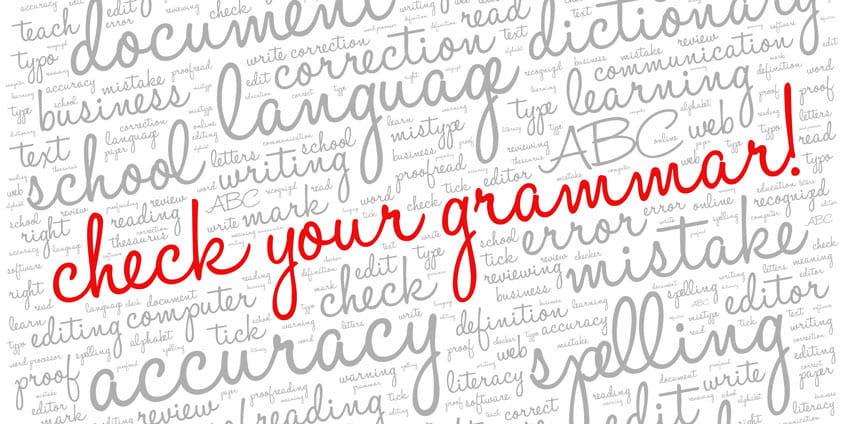 It is commonly believed that college professors judge you and your essay based on the grammar which serves as an indicator of your overall intellectual capacities. It does not matter whether your paper has a brilliant outline or great arguments, you will never get A+ because of an abundance of common grammar mistakes. In this case, one single spelling mistake may cost you a lot. Grammar is a cornerstone of human interaction. It helps to understand each other better and express our ideas. Not just the word “beach” is tricky enough to turn the meaning of a sentence upside down. So, let us define the most common grammar mistakes in English and solve the perennial problem of “you’re” and “your”.

Some of these common grammar English mistakes are easier to understand than others, but we will try our best to make it as simple as possible to help you save lots of points on your essays and research papers.

Correct: It’s a serious problem that affects all of us.

It’s been fun knowing you.

The dog buried its feces in the little box.

The rule is simple: Add ‘s to show possession

Wrong: Mr. Jones class is going on a field trip.

Correct: Mr. Jones’s class is going on a field trip.

It is a little bit trickier but simple enough. You need to put modifier next to the word they modify. Make sure that the word is actually in the sentence. If you do not have it at all, that is called the dangling modifier.

Wrong: Sipping margaritas, the ducks swam gracefully across the lake. Are these ducks kicking back with their cocktail glasses? I do not think so. So, what you have done here is actually left out whoever is sipping margaritas. We can fix that.

Correct: Sipping margaritas, we watched the ducks swim gracefully across the lake.

We sipped margaritas and watched the ducks swim gracefully across the lake.

Now, we know who is sipping margaritas.

Independent clauses must be separated with comma and a coordinating conjunction. It is a bit of grammar terminology, but all you need to remember is the word “FANBOYS” (For, And, Nor, But, Or, Yet, and So). If you can memorize this list, your life would be much easier. Here is an example of that common mistake.

Wrong: The penguin moved to Wisconsin his friend moved to Montana. You see how these sentences are fused together. They need something in between them.

Correct: The penguin moved to Wisconsin, but his friend moved to Montana.

Do not put commas around elements that restrict or define the meaning of another part of the sentence. That is fairly a technical rule but look at the following example of a common English grammar mistake.

Wrong: We went to the theater last night. I saw the movie, Gravity, in 3D. You have too many commas around “Gravity”. It defines the word “movie”. You are restricting the meaning of the word “movie” to just the one called “Gravity”.

Correct: I saw the movie Gravity in 3D.

It is getting trickier. There are 4 different rules we need to mention.

1. -Body, -one, -thing, each, either, and neither always take singular form.

2. Any, all, more, most, some, and none can be either singular or plural depending on what they go with.

So, “All the apples” is plural and “All of the apple” is singular.

It is wrong to say: Everyone is born with their own unique fingerprints. You can’t say “their” if you are confused about it, just look at the word “is” which goes with singular form. So, it does not make sense to say “is” and later on – “their”. Keep it consistent.

Correct but awkward: Everyone is born with his or her own unique fingerprints. That is correct but a little bit awkward to say “his or her”, “she or he” all the time. It is easier to replace it with something like “all babies”.

Correct: All babies are born with their own unique fingerprints.

Wrong: The girls or the boy forgot their lunchboxes on the bus. “The boy” is closer to “their” than “girls”.

Correct: The girls or the boy forgot his lunchboxes on the bus.

Wrong: The jury has reached their verdict. They had to work together to reach one verdict.

Correct: The jury has reached its verdict.

Do not omit the final comma when listing three or more items.

It is a weird combo. However, you will find people who disagree with you about this including some professors but the standard rule is to go ahead and put a comma.

A subject must agree with its verb in number and person. So, without further ado, let us take a closer look at the example of that common mistake.

Correct: The point is to improve your scores on essays. 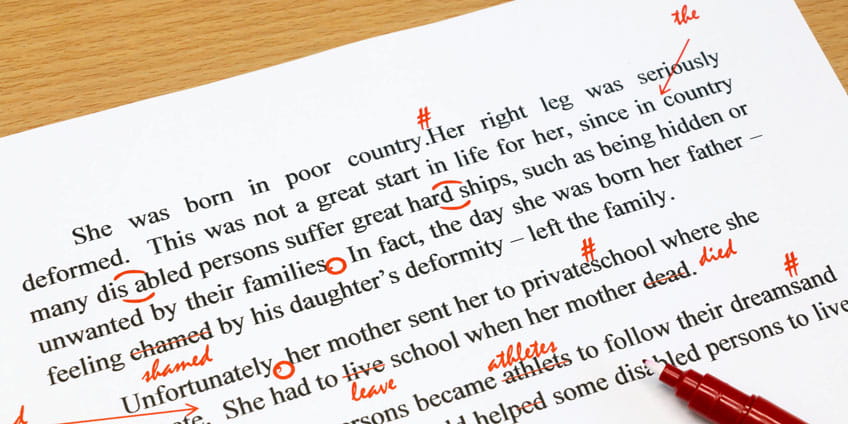 It is a typical grammar mistake. We understand that there are a lot of irregularities and traps in the English language, but in general, the verb should match the time or order indicated by the context. So, memorize and apply the correct forms for irregular verbs to avoid common grammar mistake.

Wrong: After you hear the beep, please recorded your message.

Correct: After you hear the beep, please record your message.

Prepositions can be tricky. Review usage guides and look up words you are not sure about.

Beside (by the side of) vs Besides (in addition to)

Between (two things) vs Among (more than two things)

Wrong: Do you mind if I sit besides you?

Correct: Do you mind if I sit beside you?

Proofread carefully to make sure you are using the words correctly.

Accept (take) vs Except (excluding)

Then (time) vs Than (comparison)

This is what it sounds like. You have got to punctuate the sentence like a complete piece. Remember, adding a period does not complete one.

Wrong: After I finished my homework. Does not it sound like there is something missing? It is another reason why you should always read your essays and research papers out loud. You will catch a lot of the mistakes that you would not if you just look at them. In this case, just take out the “after”.

Correct: I finished my homework.

Wrong: Because the teacher offered bonus points. It sounds like an incomplete fragment.

This grammar mistake is usually caused by the lack of proofreading. You do not want to switch to “you” after starting off in third-person. Here is a good example of this common mistake.

Wrong: When students are proofreading their work, you should read it aloud.

Correct: When students are proofreading their work, they should read it aloud.

Stick to one tense (past, present, future). If you start off in the past tense, keep it in the past.

Wrong: The snake hissed at the rat. The rat runs away in panic.

Correct: The snake hissed at the rat. The rat ran away in panic.

Do not use a pronoun unless it is clear to the reader what it stands for. Be especially careful with demonstrative pronouns (this, that, these, those) and relative pronouns (who, whom, whose, which, that).

Wrong: The embargo shut down shops, raised inflation, and bankrupted business. This damaged the king’s reputation. 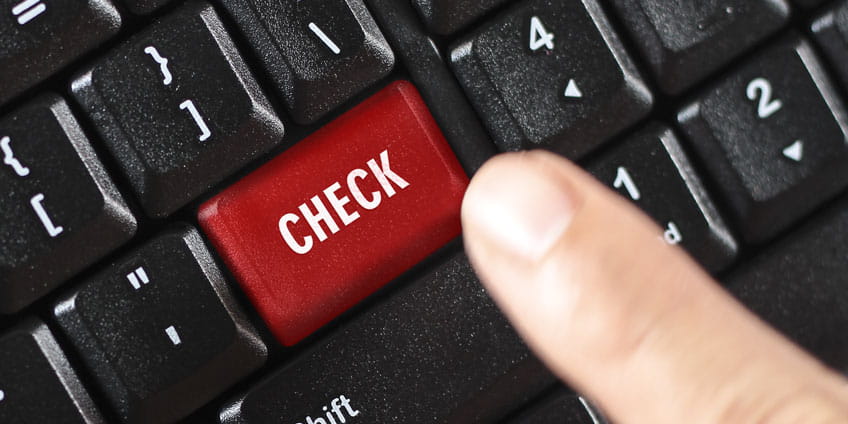 So, we figured out that you may be great at creative writing but grammar is a crucial part of your grade anyway. However, usually, the only thing we rely on is the magic power of Microsoft Word. It is a good and comfortable program, and among all the functions it has an option for checking. As you mostly create documents in Word you can see that some points may be underlined as incorrect.

Why is not this enough for the good grammar correction? To be honest, most of the Word’s mistakes are omitted and its grammar correction and especially explanations are quite poor. What is even worse is that some proper sentences may be underlined as wrong ones, so you will try to correct what does not need correction at all.

The way out is online grammar checking. You can use it as a safety net for common English mistakes in your essay. “Grammar Up” is a great example of a helpful free app for Android and IOS users with a simple interface. Punctuation is quite a controversial point of grammar, so usually, grammar checkers simply avoid this point, but “Grammar Up” is not one of these. The program can analyze the context. There are a lot of cases when the change of structure will lead to the change in sense. In case there is a choice, a program will suggest you the possible variants.

Of course, grammar checking software won’t guarantee you a mistake-less paper. The most viable option is to reread this article one more time and then proofread your paper. It is much more effective than any grammar checker.